We learned a lesson the other night. Even just tasting a small bit of mushroom can make you very sick. A valuable lesson, one we can laugh about now, one we even laughed about in the middle of cleaning the vomit on the stairs and making tea to ease down a very upset stomach. But around 3.30 in the morning, sitting with my computer in a warm kitchen drinking tea, I saw Maddy being very small and serious, cuddled up in her blanket on the couch, still feeling bad, about to fall asleep. I wondered what she was thinking.

Outside the first blackbird was singing, the day had already started. A new day in which she would be very much alive and would surely find it hilarious and embarrasing, hopefully in that order. The table was still covered with red en brown mushrooms, some withered flowers and just behind it, Maddy had fallen asleep. The birdsong made it all look like an opera scene.

We all ate mushrooms last night, the ones Maddy and I collected on our way back home. The “sammetssopp”, boletus subtomentosus. With the boletus, the one with the spongy underside, you can’t make any mistakes. The poisenous boletus can’t be mistaken for a good one. I never eat any mushrooms I’m not 99% sure of.
We had a nice pasta with mushrooms grilled in butter and garlic and a wild sorrel salad. The sorrel that grows in the woods is beautiful. Green tender leaves, cloverlike with three leaves but a brighter green than the regular clover and a long pink root that lets go very easily when you’re foraging. We collected handsful of it in just two minutes. Coffee and chocolat chip dumpsterdive cookies for desert. A two way foraged meal

Emile and Silke went for a walk and came back carrying more mushrooms. Big red ones, a “russola’ species according to Maddy and the mushroom book. Mick had told Maddy that there can never be any harm in tasting a mushroom, as long as you don’t swallow it when it tastes bitter. She thought there would be no harm in swallowing some bits that weren’t bitter.

When I went to bed they were still sitting around the table, being delighted by the wonderful red species they found. Two hours later, when I was sound asleep, Maddy knocked on my door, being genuinly afraid and shortly after very sick.

In the morning she told me that at some point she had thought “if these are my last moments, shouldn’t I then think about something memorable to say”? I was curious what she would have said. But she never told me.

Last words. I’m not sure if they carry a bigger meaning than the other ones, the first ones, the inbetween ones, the carefully rehearsed ones, the slip of the tongue.
In the end, silence always has the last word. 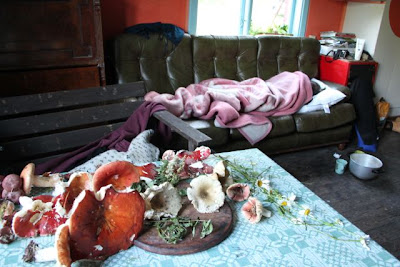